On 25th February 2018 I ran the Oulton Park Half Marathon for the first time. This event is set as the perfect warm up event for the Manchester Marathon. I paced the 1:45 #funbus which was the 43rd official event I have paced.

As always the night before I laid out my kit to make sure I had everything I needed. I had a big journey ahead of me the following day, and I am fortunate that Garry (Gaz) and Rose picked me up to take me to the event. We had a lovely journey up to arrive with a good couple of hours to relax before the start.

We made our way down to the race track to take a look at the course. The 10k race was still running and we were tempted to take part, but resisted the temptation. Before long we were meeting up with the rest of the pacers and getting ready to start.

I found out that the course didn’t have mile markers, which I understand because it is a 6 lap course which would confuse things. I was unsure of what to expect but I have ran Silverstone a few times, so am used to running on race tracks. I was briefed that the course was a perfect 6 lap course, so I worked out my pace markers by the start line. The idea being that this would be a good measurement to check my pace.

Always time for a few selfies at the start line, and always great to meet up with familiar faces. Ant was the odd one out in #visorclub but we didn’t hold it against him.

We lined up and immediately I had a good group of runners around me and we were ready to start. It was such a beautiful day and the track is so much more beautiful than Silverstone. My desired pace was 8 min/miles and I aimed to run slightly faster, so tried to average a 7:55 min/miles.

There were two hills in the course, with the second one not having much of a downhill to compensate. Neither were particularly challenging for the first lap, but with 6 laps we would find these increasingly more difficult. We had a good group of runners on the 1:45 #funbus who stuck with me throughout. 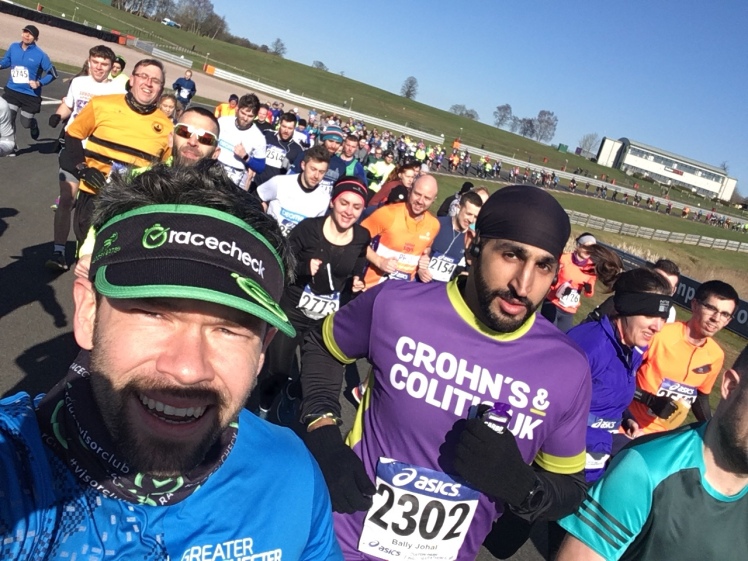 It was strange after a few laps being overtaken by the lead runner. And shortly after we started to overtake people ourselves. As always I tried to keep those we past motivated by shouting out encouragement. Although we did not have mile markers I shouted out my splits each mile. I found that the course was going to measure long because I was running ahead of pace, yet each lap I was spot on. I worked out each time I past the start timing mat exactly what I needed and knew I was bang on pace, and so reassured everyone around me.

Once I got to the 5th lap I started overtaking Pace groups. You could tell when a Pace group was coming up because this is where the big groups formed. I approached Gary Dixon on the 2:15 #funbus and could hear his jukebox, I shouted to him and he turned and got a photo of me. Once we got to the end of lap 5 and past the timing mat we were spot on, with a nice 20 second cushion. I shouted the timings out to those around me and when we had just one mile to go encouraged people to push on. About half of the group at this point pushed on ahead of me.

As we reached the final turn I held us at a consistent pace. At this point most were ahead of me but those behind me were struggling to keep up. I slowed a little and offered encouragement to try and keep people with me and speed the group up, and a few pulled away with me. Unfortunately this slowed me down a bit and as we turned off to finish I realised that the finish line wasn’t alongside the timing mat I had been judging my time on, it was a good 10 seconds later. At that moment I realised I had two choices: 1) stick with my group and keep them coming, but my official time would be late; 2) Pick up the pace to get just under. Needless to say I stayed with the last few of my group and pushed them as fast as they could go, but finished in 1:45:04.

I am disappointed because I ran 13:34 miles and always took the shortest path in corners, keeping the race line, but ran an extra 400 metres. I averaged 7:53 min/miles to adjust to the course which would have seen me 100 seconds under. What is most frustrating is each point I ran past the timing mat I made sure I was on target. But the finish line was a good 10 seconds further. What should have been a perfect finish turned into 4 seconds slow. I’m not going to dwell, because everyone who finished around me was very happy. People waited for me at the end to thank me; people got PB’s; and those behind me pushed as hard as they could. I decided to stay with the last man pushing him as hard as I could rather than run ahead. I am glad I stuck with him as I would have been less satisfied finishing 4 seconds faster, but alone.

It was great finishing and waiting for lots of familiar faces including Gaz and Phil who both had fantastic races. I enjoyed the course, a bitter sweet experience as people know that those 4 seconds mean a lot to me and frankly I’m gutted. I made the decision to just come in slow but keep people with me. Next up is the Big Half next weekend where I will be pacing 1:45 again, who is with me?

Don’t forget that you can still vote for me for the running awards. I appreciate the support and every vote counts. Please click HERE find pickupthepacepaul in personal blog, in online publications. Thanks guys.