On 11th March 2018 I took part in the Surrey Half for the 2nd time. The first time was back in 2015. After freezing weather just a week ago, and the skies looking like rain was not far away, it actually turned into a lovely day to run. This is the 2nd time I have paced 1:40 at Surrey, but it is also the 45th official event I have paced, 20 of which have been for Xempo.

As always I laid out my kit the night before to ensure I had everything I wanted. I decided to try out my new trainers that I am running London Marathon in, to break them in a bit. The Surrey Half was only about a 40 minute drive for me, it’s just unfortunate that it’s held on Mother’s Day. My wife is understanding and was happy for me to run, on the understanding I would make it up to her.

It was pretty easy to find parking just a short walk away from the start. Once there I met up with all the other pacers and had a good catch up with them. There were plenty of familiar faces there and just before our Pacer group shot I got dragged off to jump in the Racecheck group shot.

It was good to catch up with everyone. Unfortunately I was not able to stop and chat because I had to rush back just in time for Xempo photo. Before making our way to the start line.

It was a bit of an odd set up getting ready for the start. Our point to line up was in the middle of the race village, so it didn’t really feel like we were lined up. It all worked out though and everyone found us because of our pace flags. I had a good group form around us, and then we were ready to go.

I had been told the course is mostly flat, but I shouldn’t have believed them, as Surrey is never flat. As we set off it felt busier than it perhaps was as much of the route was narrow. It did feel crowded at times and this stopped me getting to full stride, but it didn’t stop us reaching target pace. The crowd support on this event is particularly good. This is a decent size race, but the crowd support is similar to a much bigger event and much bigger than most events I take part in. The crowds make a huge difference to people’s race experience and it is wonderful to see so much local support around.

The roads were closed, and the route was bumpy, yet there were no significant hills to worry about. I really liked that the water was provided in small bottles. This is a real plus for me in a race, as it helps keep runners hydrated. The water was also frequent, especially at the end there was more than needed, so I only took from about half the stations. There were lots of happy runners around us and it was great hearing from those who were running with me. Some in training for London, others aiming for 1:40 for the first time.

Whilst pacing my job isn’t just about getting the Pace right. Don’t get me wrong that is a really important part, as is running consistently throughout. But a big part of it is the support and motivation you can provide to those around you. As we get further into the race I encourage those around me more and more. I try to help people stay mentally strong, as often your mind gives up before your body does. That little lift people get from encouragement can help them to keep going that little bit further. I know I help people by setting the pace, but what I strive to do is keep people going. The real success is all those that were about to give up on their time, but carry on because they get a boost as we pass.

Even with a few bumps in the route we managed to maintain a nice even Pace, and we carried on running strong until the very end. I had encouraged runners to get ahead of me over the last mile so there were very few behind me once I approached the finish stretch. That meant I didn’t have a need to slow down to encourage towards the end, as most were ahead of me. I finished in an official time of 1:39:31 which I am very happy with. 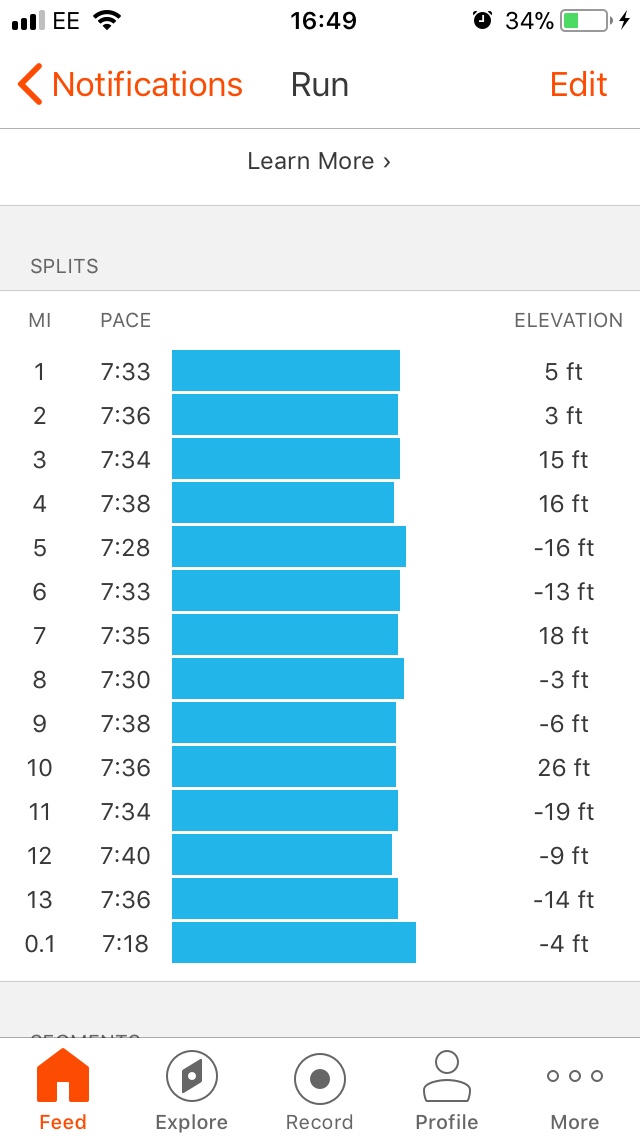 Looking at strava I am pretty happy with my splits that were relatively consistent. I actually sped up in the finish because I was trying to push people to get ahead of me, as I would hate for them to fall behind and not achieve their goal. It’s great as I had a few dozen wait to thank me at the end, some with impressive PB’s and another who had not hit 1:40 since 1998.

What a great race, one that has a 5k and 1k race attached to it on the same day. Certainly a nice race to get involved with. You get a decent medal and a few goodies at the end, but no race tee. There were plenty of things to do for families and friends in the race village, so it catered for everyone.

Next up I have the Limassol Marathon next week. What do you all have planned, are you joining me on the sub4 #funbus

One thought on “Surrey Half Marathon 2018”