I was asked if I would like to read Moire O’Sullivan’s latest book “Bump, Bike and Baby”, and I was immediately intrigued. I am a family man who loves to run, but family always comes first. My wife Kirsty doesn’t think so sometimes with the amount I run, but I would give it all up if I ever had to choose. My family is everything to me. So I was very curious to read more as clearly Moire has a very different view.

Moire writes about her personal journey as an adventure racer and mountain runner at the top of her game (she is Ireland’s National Adventure Racing Series Champion 2014, 2016 and 2017 as well as Ireland’s Mountain Running Champion 2007 and 2008. She was also the first person to complete Ireland’s Wicklow Round in 2009). With such accomplishments there clearly needs to be sacrifices.

Parenthood was the last thing on her mind: in fact, it was something that she hadn’t originally wanted. She describes the blood, sweat and tears as she becomes a mother of two, and how she now manages to juggle becoming a mum with her own training and racing goals. I’m seriously impressed with her achievements, having two kids myself I dot know how she finds time to train the way she does, or have the energy to do so. I asked Moire some questions about her journey.

1. Moire, you talk very openly about not wanting children. Was there a time you thought it wouldn’t happen?

One of the main issues I had was that my biological clock just never ticked. I would see friends’ babies and have zero maternal feelings. This lack of emotional connection was coupled with the fact that I saw the impact of having a young family had on these same friends. Once they had kids, they simply didn’t have the time or energy to train or race like before. After undergoing childbirth, many of my female friends’ bodies were never quite the same.

Before I got married I had, however, promised my husband that we would try to start a family. Pete definitely wanted kids. Our opposing desires for parenthood, and commitment to actually getting pregnant, definitely started to put a strain on our relationship when I struggled to conceive. With Pete in his forties and me in my late thirties, we hadn’t realized that, at our age, we needed a proper plan in place.

Eventually a GP set us straight and said, that if we wanted to have children, we would have to get a move on and make more of a concerted effort. This, coupled with the fact that I had given my husband my word, meant I resolved to at least try properly to see if it was even feasible or not to have kids.

Within two months of our GP meeting, I discovered I was pregnant. I practically went into shock. Fortuitously, I have several friends with children who also had non-existent maternal instincts, similar to myself. They promised me that, even if I didn’t warm to babies in general, I would feel different about my own offspring. Luckily for me, they were right.

2. Are you glad now that your husband talked you into it?

There are definitely days when I am so proud of our two sons and I feel so fortunate to have the opportunity to be a mum. It is also quite amazing how much I’ve learned about myself, and life in general, thanks to raising our two young boys.

I have to admit though that there are other days when I look at friends who have made the personal decision not to have children and I can’t help but feel a little jealous, particularly when I see the amount of time and personal freedom they have. I definitely feel jealous of them when I’m forced to comfort my screaming toddler because his breadstick accidentally broke in two.

Being a parent is very challenging, and there are definitely pros and cons. This reality is why I felt compelled to write, Bump, Bike and Baby. I wanted to show that being a parent can be wonderfully fulfilling, but also at times really hard. I also wanted to communicate how taking time out to do something you love, which for me is adventure racing, can really help you come home afterwards and be a better parent.

3. As a parent I completely understand the impact this has on training. Can you share your top tips to strike a happy balance.

Pete and I have had many conversations about how to help each other cope with parenthood. In particular, Pete knows how hugely important training is to my psyche. Having a supportive partner, who understands that I need a daily break from motherhood in order to train, is a major component in helping me strike that balance.

However, I’m well aware that not everyone has the luxury of a flexible and supportive domestic arrangement, and indeed there are other ways to balance training and parenthood. When my first born was four months old, I bought a Bob Revolution running buggy, an amazing contraption designed for high-speed, off and on-road running with a baby. This was the perfect way for me to get out for a jog without childcare. And more often than not, my first born Aran fell asleep on the run.

If going outside isn’t feasible, a set of biker rollers is worth their weight in gold. In my case, they were a present from my husband for giving birth. I would put Aran in a jumperoo, or wait until he was having a nap, and then would do an indoor bike session, while keeping an eye on him.

If a buggy or bike rollers are cost-prohibitive, strength and conditioning exercises at home are a brilliant way to get in shape again. Squats, lunges, press-ups, and skipping are great to keep fit and put a post-natal body back in some sort of shape.

I feel the biggest parenting challenge is just being time-poor, and there are really no easy answers to this. My sincere belief though is that a happy parent makes a happy child, and if this means taking time out for yourself, even thirty minutes a day, then it will probably go a long way to creating some sort of household harmony. 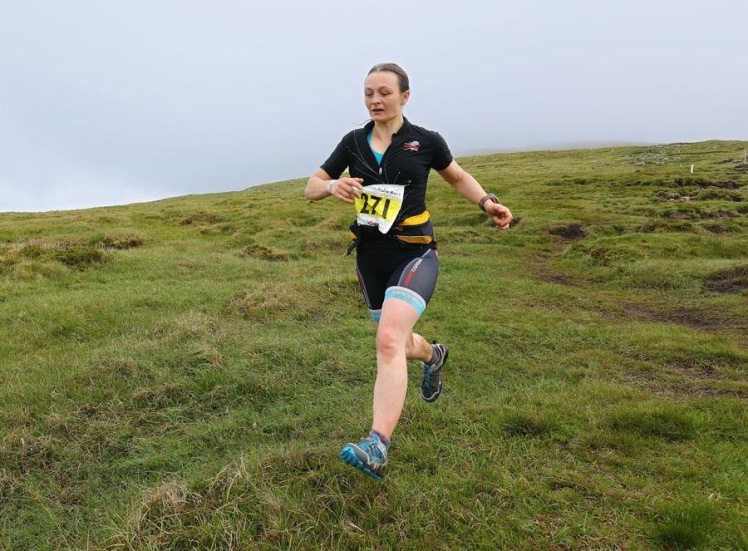 4. How have your priorities changed now you are a parent?

I am definitely more focused in everything I do these days. I have a coach who ensures my training is as effective and efficient as possible. It means that, if I have an hour’s run to do, it has a specific goal, whether it involves hard intervals or active recovery. I also race a lot less these days, and when I do, I try to be as prepared as possible. I am also much more appreciative of the time I have to train and race, whereas before I took it for granted.

My own sporting priorities have also undergone a shift in the last couple of years. Though my own passions are mountain running and adventure racing, somehow my children love swimming and orienteering. I think the fact that they see their mum so active encourages them to get involved too, although in slightly different activities. And as I get older, and a little slower, I’m looking forward to supporting them in their own sporting goals.

4. Do you wish you had children earlier?

I am in the very fortunate position that, when I had my first child at the age of 37, I had already done a lot of the things in life that I had wanted to: I had travelled, lived in different countries, worked in interesting jobs, competed in the races I wanted to. I don’t think, ‘I wish had done such-and-such a thing before having children, and now that’s not possible.’ That’s the real advantage of having children a little later in life.

The main issue that we confronted when having children this late in life was the inevitable health worries. My husband and I definitely were concerned about our own fertility and about whether the babies would be born healthy.

I do, however, wonder if we had had children earlier, if we would have more energy for them. But then again, sleep deprivation is hard whatever age you are!

My first born, Aran, will be starting primary school later this year, so I’m looking forward to seeing him thrive in this new environment. His absence will free up several hours each day and I’m considering going back to university to upgrade my skills or maybe writing another book. Pete and I adopted a Vietnamese street dog named Tom, whose short life has been much more interesting than mine. There could be a memoir in the offing.

In terms of races, I’m hoping to do a few longer races this year. I am signed up for Quest 24, a 250 kilometre adventure race around various mountains, valleys and peninsulas in the southwest of Ireland, involving mountain running, biking, and kayaking. If the weather is good in June, I’m also hoping to do the Denis Rankin Round, which is a mountain-running challenge akin to England’s Bob Graham Round. The Denis Rankin Round circuits all the major peaks in Northern Ireland’s Mourne Mountains, covering ninety kilometres with 6,500 metres in ascent, that must be completed within twenty-four hours. 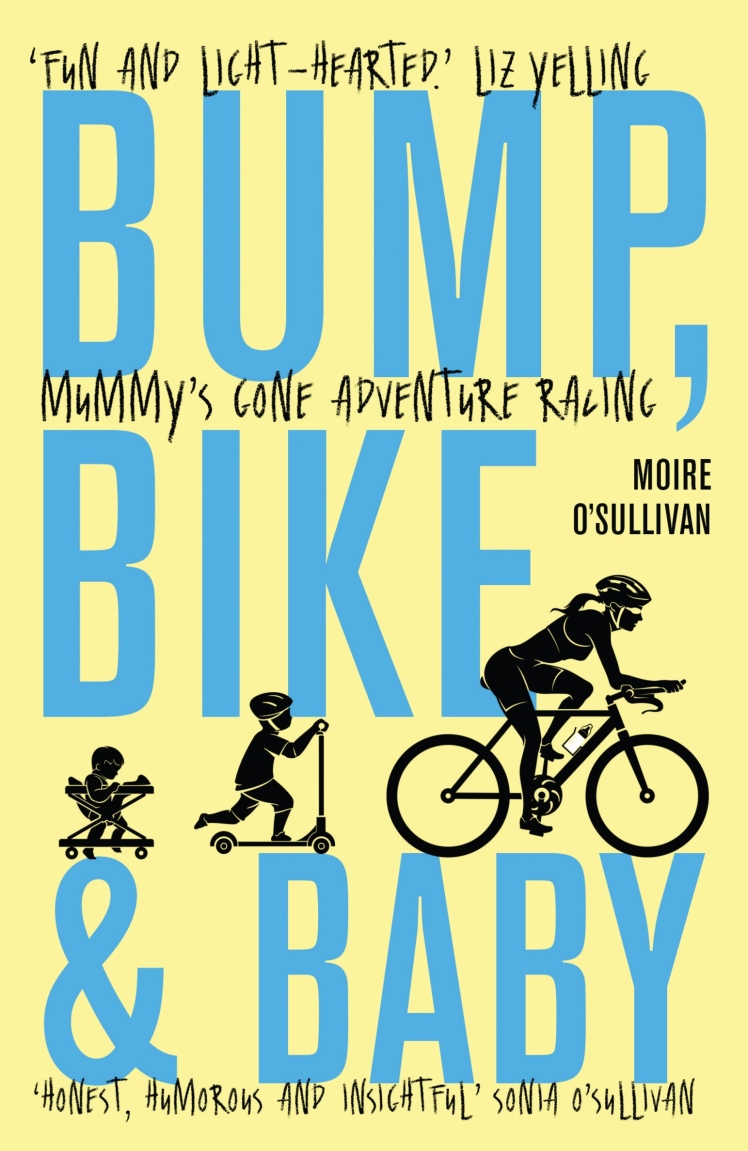 If you want to read for yourself here are the details you need: Bump, Bike and Baby – Mummy’s Gone Adventure Racing. Sandstone Press. Format: Paperback. ISBN: 9781912240067. Publication Date: 15/03/2018. RRP: £8.99. Available from Amazon, Foyles, Easons, and Waterstones. Paperbacks can be purchased here: https://goo.gl/8XDUZe and e-books can be purchased here: https://goo.gl/Q3p1fm

In Bump, Bike & Baby, Moire O’Sullivan charts her journey from happy, carefree mountain runner to reluctant, stay-at-home mother of two. With her sights set on winning Ireland’s National Adventure Racing Series, she manages to maintain her post-natal sanity, and slowly learns to become a loving and occasionally functioning mum.

One thought on “Moire O’Sullivan – Bump, Bike and Baby”