After all these experiences I am used to the event atmosphere, but even so, Royal Parks is always a special event. You can always tell when an event is going to be special, when you head towards the event village with 16,000 runners expected. This inner London event has an unfortunate early start, with a 09:00 hours start I am able to get the first tube, but for many there is no choice other than to stay in London or set off stupidly early. The tube was particularly busy for 07:00 hours on a Sunday morning (I wonder why), and there was a buzz in the air as soon as I got off the tube at Hyde Park Corner. Just a short walk and I was there, and already the village was getting busy.

Top tip- don’t head or the first set of loos. My first visual was long queues for the toilet, I skipped this and went to the far side of the village where there were more toilets and no queues.

I made my way straight to the Xempo tent, as always, to get my number and meet fellow pacers. I think this is the biggest number of pacers that Xempo offer at events, which is needed with such a large audience. TomTom had provided Team TomTom tops for us to wear, so I had a quick change before chatting with the rest of the Pacers and passing runners before the event. 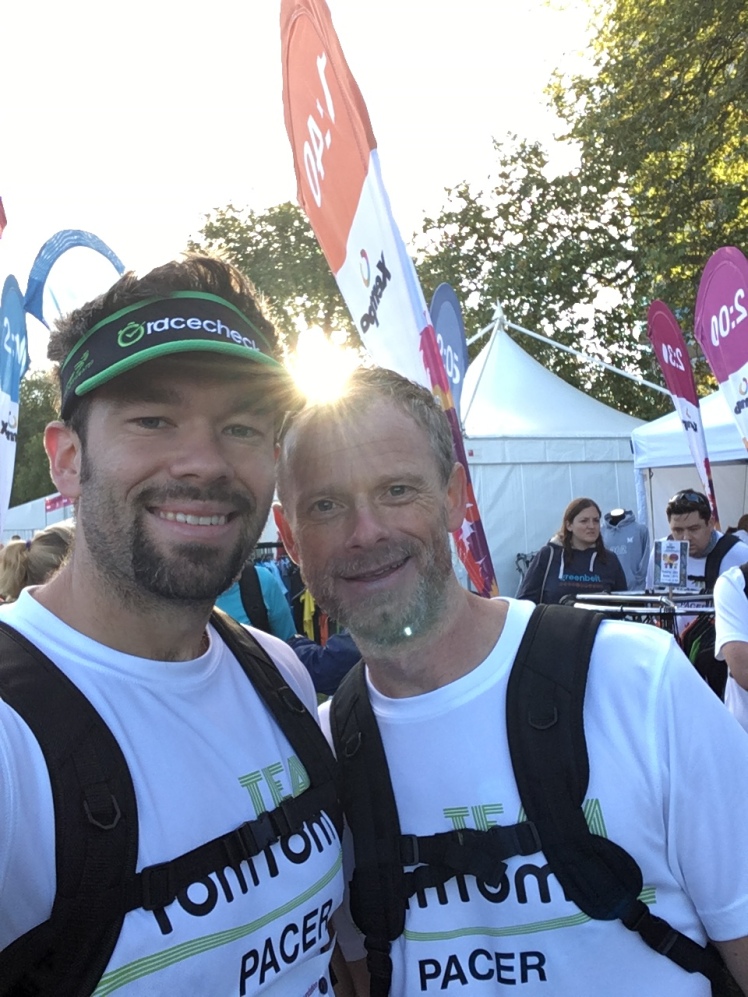 I received the beautiful event top, which I always use as my after event top. The Royal parks Tshirt is always impressive and a highlight for me. 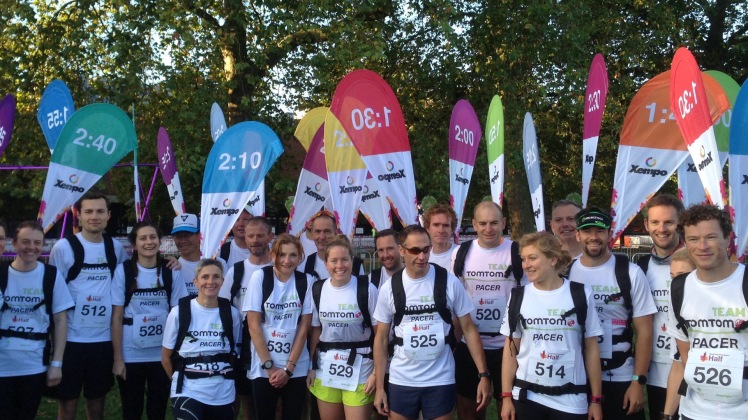 I took the opportunity before the event to pop by the TomTom stand and say hello to the gang from team TomTom. They had a big stand at Royal Parks as they are not only a sponsor for the Xempo pacers, but a key sponsor for this event.

I said a few hello’s to the regulars, and as I was leaving I got dragged into the team TomTom photo (timing is everything).

We made our way to the start line early so runners could place themselves near us. I got a little worried at the start as I lost signal next to a huge tower next to the start. After 20 minutes trying I gave up, to be honest using my watch as a stopwatch would be sufficient as I just gauge my pace by the mile markers anyway. This event is in waves to try and give everyone a clearer start, and I was in the second start. Once we made our way to the start line my watch kicked in, which I felt good about… Do I need it, not really, but it certainly is a good comfort blanket. 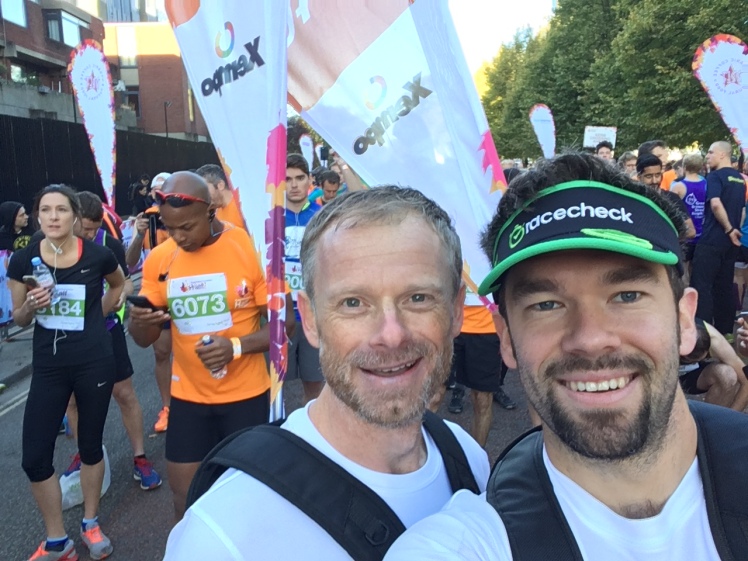 So we were off. I had spent 30 minutes surrounded by hundreds of runners wanting to run with Steve and I. Such a large crowd aiming for 1:40, many for the first time. I gave my usual talk, offering reassurance that I would run even splits; that I would not speed up or slow down dramatically. I asked people about their previous experiences and assured them they could achieve their goals. 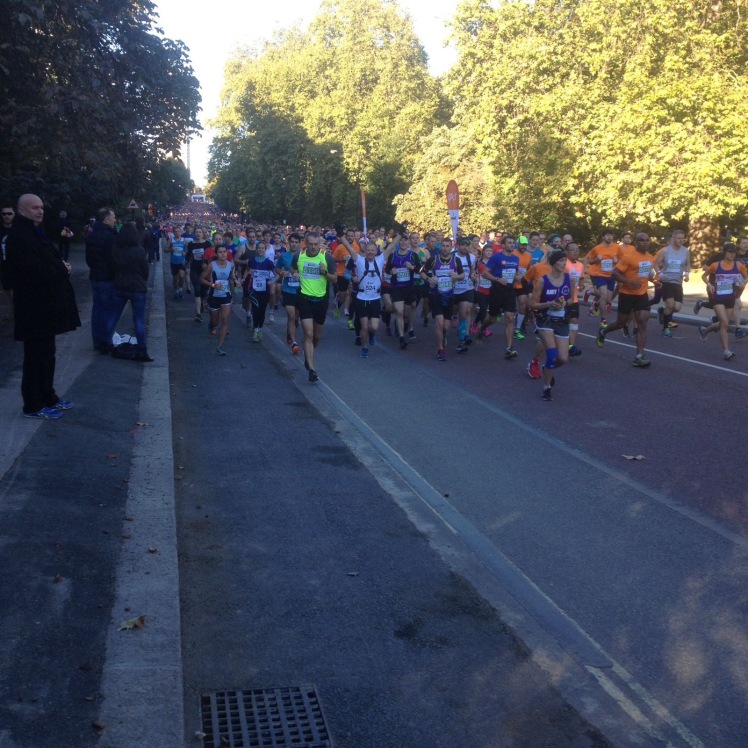 After just the first mile there was a section which was silent. On a course full of spectators; a course that compares to the London marathon, and one unrivalled for support at a half, this was my favourite section. I told those around me to just listen, and it was such a peaceful sound to hear hundreds of feet pounding the pavement at one time. 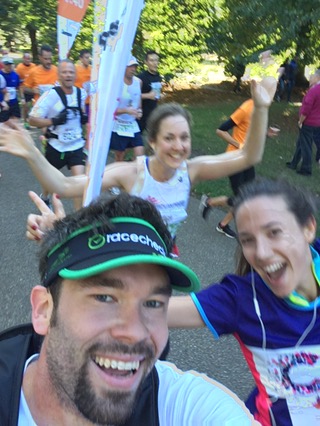 It was a beautiful hot and sunny day, and this course takes you past some of the best attractions London has to offer. The first half is populated with the urban attractions, whilst the second half takes you through the beautiful parks that run through London. I love running through the parks, and it is pretty special with the amount of support this event attracts.

On the whole this was a well organised event, with very few reasons to complain. Unlike most events I only had one person question my pace, and that was in the first mile. For an event with so many people following me this was pretty unusual. I kept people informed each mile that we were on pace and continuously offered support, and it really was a lovely bunch of people around me. This was the first time I had run with Steve. I have met him at numerous events, and know he is a very experienced pacer, but this was the first time we had run the same pace together, and it was a privilege to run with him. I set off slightly ahead of him, but he followed literally a few feet behind me, and it was good to shout out to one another each mile to check how things were going and offer support, and we carried on this way until about mile 10 where we joined up and ran the final 5k together.

Our splits were pretty perfect, if I do say so myself. Our target time is 7:38 minute miles, but we always go a few seconds a mile faster to ensure we get everyone under their target time (as I always say, I am going for within the minute under). Our first split was 7:34, perfect for what I find is always the hardest mile to get right. Unfortunately the mile markers were slightly out (which I find is not unusual) so we hit the first mile marker at 7:55, 20 seconds over. Steve and I made a conscious effort to raise the pace for the next couple of miles, only by a few seconds, but enough so that by mile 4-5 we were hitting the right time at the mile markers. By this time I was 20 seconds faster than my watch, but bang on for the mile markers, so I just maintained this even pace. 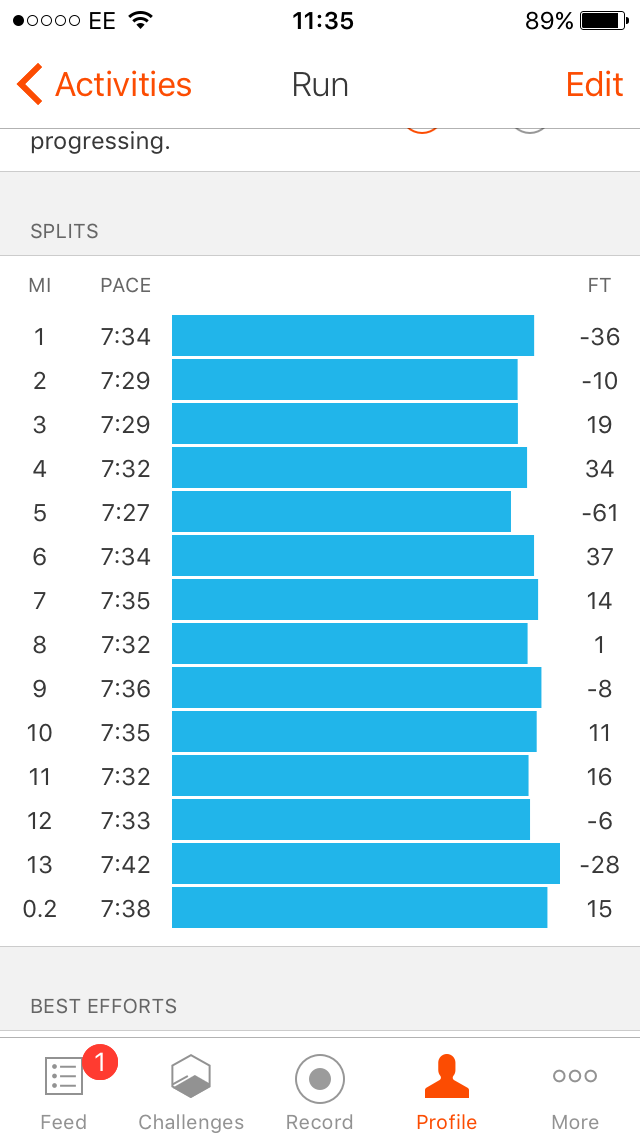 This is a really flat course with only a couple of inclines, which are nothing to write home about. The biggest hazards are a few sharp turns that become particularly narrow. At a few narrow sections I found the pace naturally slow, so I had to encourage everyone to “pick up the pace”, to not let us slow. I’ve said this before, but it was a particularly good group if runners around me, and it was great that coming up to mile 11 there were so many familiar faces that had been with us since the start. The best thing was, they all sounded great. Inevitably we lost a few, but not as many as I would have expected. We come towards the final stretch and you are lifted up by the 800 metres to go sign. I turned at this point to see a swarm of people still behind us, and offer encouragement. I spent the remaining half a mile trying to get people to run past me and give people that last push they needed to get their sub 1:40. They had come too far to fall a few seconds out now. 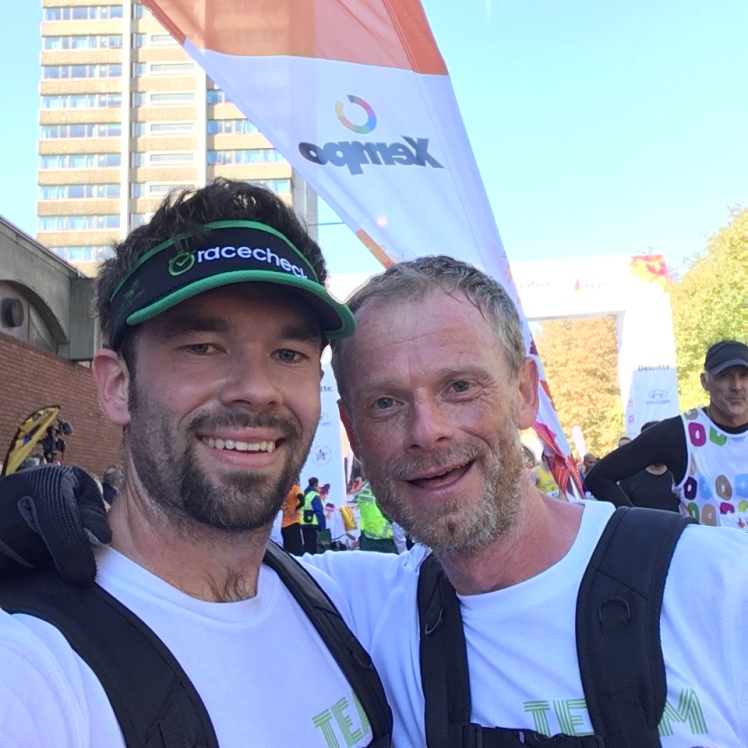 I crossed the finish line in 1:39:45, an average of 1 second a mile faster than my target time. I was met by a lot of happy, smiling faces waiting to give Steve and I a handshake, and a few big hugs (I won’t dwell on the hugs otherwise my wife will stop me pacing 😂😂). A fantastic event, beautiful route, amazing crowd support, lovely group of runners, and one awesome pacing partner.

We were met by the usual wooden medal, which is pretty special, and I’m always envious of the special ribbon for the top 500 finishers. The next point is arguably the only, but pretty universal criticism of the Royal Parks half marathon. When you finish you have to join a huge queue to get your goody bag. This has always been the way, and it’s never that bad for me, but it gets progressively worse as more people finish. I was in luck and moved to the back queue which at that point was not that busy, but when I came back 15 minutes later the queue would have been at least 30 minutes long. This is disappointing as all the goodies are lined up and given to you, and the worse thing is these queues are unnecessary. There is no reason it could not all be bagged up and given out quickly as people walked past, I really don’t know why the event lets itself down in this area. The ironic thing is, it is probably the best goody bag I have ever been given at an event. Unfortunately social media has been populated with criticism about this aspect, with many not waiting to collect their goody bag. The thing I thought was silly is that usually they give a lovely natural bag in line with the eco friendly event, and this is decent bag to keep. This year they decided to give a plastic bag that was smaller than the bag of ritz cracker crisps that were handed out. I had my own bag (#prepared) but otherwise you would need 4 bags to get everything in. 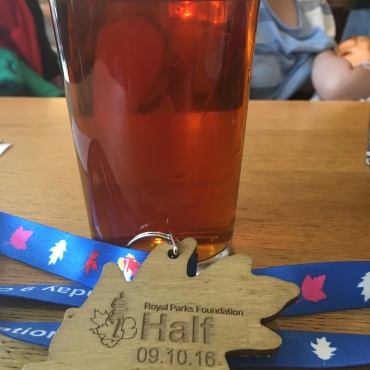 I met my family at the end as I made my way to the Xempo tent, and this was a great end to his lovely morning. I noticed on Twitter Pret were offering a free coffee to runners, so I got one on the way to the station for a beer and burger.

I highly recommend this event, and I will be back, this is without a doubt my favourite half marathon.

If you did achieve a pb at this event don’t forget to check out Xempo. If you followed me you are eligible for a blue top 💪

Check out racecheck for more reviews: