I’ve heard people talking about events with a real community feel before, and now I understand what they mean. Hackney Half was a wonderful event with a lot of support from spectators, and I was very happy to be part of it.

I paced the 1:40 group at Hackney Half, which was the first time I’ve been at this event, but the 28th event I have paced. At short notice I also paced the 5.5k for the 30 min group, so a very busy day. As usual I got my kit together ready the night before.

Very standard race kit picture for me. I aimed to give my fitness rewards too it’s debut, but with the rucksack this wasn’t going to work. I wore my Asics trainers and new CEP compression socks #colourupmyrun my Racecheck visor always makes my kit list these days #visorclub and I had my 1:40 pacepocket. My pre race nutrition consisted of a Grub bar and a banana, and a pack of Biltong post race. And OOFOS for after both events.

I was given free entry for a future event for pacing Hackney, but the organisers kindly let me use this for Kirsty. And I surprised her with an entry just a couple of weeks before race day. It was a bit of a pain getting to the start having to park at Westfields and then walking for 30 minutes, but it wasn’t the end of the world. When we got to the race village it was already buzzing and it was clear that Virgin Sport are trying to energise running with a festival feel. Walking towards the volunteers meeting area something happened that changed the course of the day. I saw a group of volunteers wearing morph suits.

For those that know me, you will know I’m always looking for a challenge and all about having fun. When I saw the guys in the morph suit I thought that would be fun to run in, and something I could do to help energise the event. I know I’m comfortable with the 1:40 pace so I wasn’t too concerned about it. So I asked, and to my surprise they had a couple spare.

Phil was also pacing and unfortunately for him I manage to talk him into it. Well to be fair, once he saw me in mine he didn’t take too much convincing.

Once all ready it was time to go our separate ways. I’m sure Kirsty was glad to get away from me as I was attracting some funny looks 😂

I got a warm reception at the start line and there was a good crowd. I talked with them all at the start like normal and I think it took a little longer for them to warm to me than usual. Obviously my appearance was a bit off putting at the start, but once we got talking I discovered a great group ready to PB at 1:40.

My view of the event will be different than most, literally. I could see fine, but could not make out detail and struggled to see properly too far ahead, so I concentrated on my feet and any upcoming hazards. I still kept the group engaged and called out encouragement. As a result of my pacing and the morph suit I did not take in the surroundings the same. What I did find was there was a lot of support. Now this is a decent size course, but I didn’t expect there to be as much local support. There was music and dancing, and people everywhere. Kirsty summed it up nicely when she told me about her event saying:

It’s got a real community feel, there was so much local support everywhere with Jelly babies everywhere you looked. I high fived so many kids.

Now I experienced this, I saw the crowds, but it was much less personable in my morph suit. I did get called RED a lot. For me it is so important to keep the pace right, and I managed this throughout. 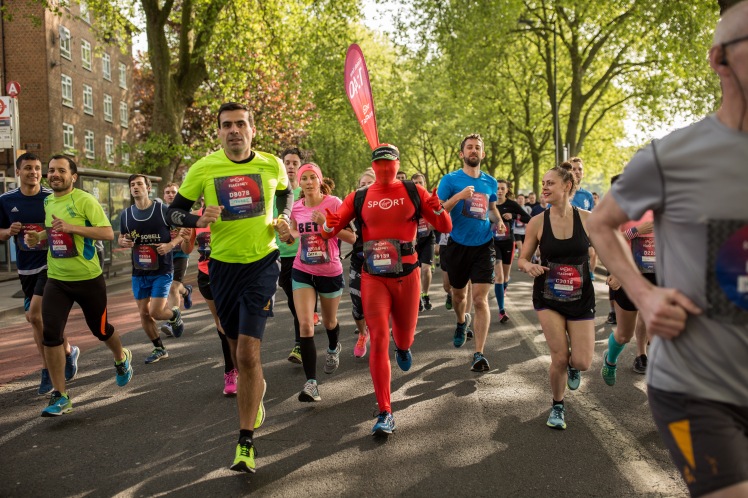 I sped up early on as the mile markers were further away than my watch said, which is expected as we end up running a longer route. But towards the end we kind of caught up with them which I didn’t expect. You can never prepare for that, so as a pacer you just need to adjust accordingly. Everyone around me seemed to have a fantastic time and appreciate my mile updates.

The course wasn’t as flat as I had thought, but none of the hills were that gruelling. Again I did not take in all the sights, but most of it was lined with spectators. There were some cool sights though, like the Olympic Stadium.

As we approached the finish one of the other 1:40 pacers caught up with me and overtook. Many of my runners then ran off in the last mile, which I always encourage. But it was great to see many of them waiting for me at the end. I finished (according to my watch) in 1:39:43 which I’m happy with for sub 1:40.

Once I finished I was glad to take off the mask. I was very hot and did not anticipate how hard it would be running in this. I went back to take off my suit and into something more comfortable before going and seeing some others finish. First of all Phil, who had opted to take the hood off earlier on.

Then I was waiting for Kirsty who I am really proud of. She hasn’t really been training much so just completing is an awesome achievement. She always finishes with a smile on her face.

It was great to see Kirsty at the finish and at this point I did wish I hadn’t signed up for the 5.5k. Our kids were with Kirsty’s parents in Westfields and this would have been a good time to leave. I saw last minute that there were gaps for the 5.5k pacers so I offered my services. At the time I was just happy to help out but had not anticipated the gap in the middle. I had originally thought the family would come and stay for the day, but the lack of public transport and walk from Westfields meant this wasn’t going to happen. It didn’t matter though, I’m glad I could help and love pacing.

After seeing Kirsty off I had to find some stuff to do. The festival was great if you had people there with you to enjoy the atmosphere. There was also a free massage tent, but the queue was too long for me unfortunately. Randomly they also had free haircuts happening. I was tempted but I would end up with lots of loose hair on me which I wouldn’t like, so gave it a miss. It was great to bump into Neil from Grub and have a catch up. We have been communicating for months so it’s great to put a face to a profile.

Finally it was time for the 5.5k. I was looking forward to this and would be a nice cool down for me. There were lots of happy runners. What was different is many didn’t really have a target time, taking it much more relaxed. I also expected to see many there from the half marathon, but most were there for the 5.5k.

The 5.5k was much more relaxed and everyone was having fun. Obviously this is something I encouraged. We were overtaken my Mary Wittenberg early on, wish I had my phone out for a selfie 😫 I had a big group around me and stuck at pace. I aimed for about 5-10 seconds a mile quicker so we would get in about 29:30 and I would ease off for the final 500.

One thing that was frustrating on this course is I did not see any markers. I was told they would be in kilometres. If they were there they must have been taken down as I couldn’t see any. I didn’t worry, it just meant I would just  use my watch. I thought there couldn’t be much variation on such a short distance. I got to timing mats which I assume indicated the half way point, and I was on 15:20, so slightly slow, which I did not expect as I had been running faster. So at the half way point I put my pace to 8:30 instead of 8:46 as needed. But I was sure I wasn’t going too fast. When we were coming towards the final turn I was on 3.12 (5k) so we had 500 metres to go, perfect I thought, we must run past for a final bit? But no we turned and the course measured at little over 3.2. A good 200 metres short at least, and at my pace that’s a minute. I was tempted to slow right down, but that’s not my style, so I slowed to encourage those around me and came in at 28:14. I’m really disappointed with this as I was pacing fine, and it means a lot to me to get it right. Next year there needs to be markers on course and check the distance. Either one would have helped me come in on time, but both would be preferable.

It did not matter as everyone around me was happy to come in faster than they expected. But everyone commented on the course distance. When I finished it was great for a double medal shot.

I had a fantastic day and highly recommend this event to everyone. For more reviews on Hackney Half Marathon check out Racecheck. As always I get rewarded for every run I do with Fitness Rewards. Feel free to ask me how!